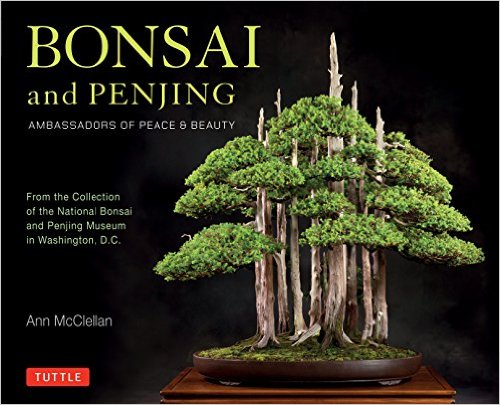 This book tells the awe-inspiring stories of bonsai and penjing trees in the collection of the National Arboretum in Washington D.C.

This book tells the awe-inspiring stories of bonsai and penjing trees in the collection of the National Arboretum in Washington D.C.

It details their valuable role in international diplomacy and as instruments of American presidential influence. It also describes their inclusion in world’s fair exhibitions, in Asian-inspired gardens around the country, and as a window onto the extensive cultivation of bonsai in North America today. An extensive first-hand account by Dr. John L. Creech is included about the first extraordinary gift of 53 bonsai from Japan to the U.S. in 1976 which prompted the founding of the National Bonsai & Penjing Museum.

Bonsai & Penjing, Ambassadors of Beauty and Peace describes how Chinese penjing and North American bonsai were later added to the Museum, making its collection the most comprehensive in the world. Stories of individual trees and forest plantings are featured, as are the roles played by the skilled and talented creators of these living art formsÃ¹people such as John Naka, Saburo Kato, Yuji Yoshimura, Harry Hirao, and Dr. Yee-Sun Wu. Armchair travelers can experience what a visit to the Museum is like, including the discovery of its remarkable viewing stones.

Bonsai & Penjing, Ambassadors of Beauty and Peace will delight anyone intrigued by these living works of art and curious about the stories they bring to life.

Look Inside
Disclosure of Material Connection: Some of the links in the page above are "affiliate links." This means if you click on the link and purchase the item, I will receive an affiliate commission. I am disclosing this in accordance with the Federal Trade Commission's 16 CFR, Part 255: "Guides Concerning the Use of Endorsements and Testimonials in Advertising."